Tip: Not only fans of modern art will enjoy the visit without burdening their holiday budget. The terrace on the 10th floor offers excellent views of the river Thames and the skyline of London with the St Paul's Cathedral. 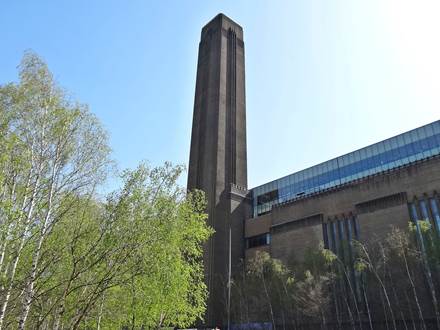 The Tate Modern is the leading modern art museum in London. It shows masterpieces as of 1900. Also this public museum charges no entrance fee. There are even every day several free guided tours. The tours are related to certain subject areas and last approx. 45 minutes. (link to further information below). The presentation and layout of the different areas is quite sober. This supports the focus on the art works. If your imagination is not stimulated by modern art, you should really think about visiting one of the other museums in London. However, if you like to enjoy a nice view you should plan at least a short visit to the terrace on the 10th floor of the Blavatnik Building. But also the kitchen and bar on the 6th floor of the Natalie Bell Building has a long row of window seats with great views of the river Thames and the City of London.

The Southwark underground station is located nearby and easy to reach. For simple orientation all the masts of the streetlights are painted orange along the way. These big signs can not be missed and lead directly to the Tate Modern. But the way is not very attractive.
If you do not mind a short walk, you should get off at St Paul's underground station. From there you have only to walk a few steps till you reach the St Paul's Cathedral. From the south side of the cathedral a straight pedestrian walkway leads directly onto the beautiful Millennium Bridge. After passing the pedestrian bridge you reach the south bank of the river Thames directly in front of the museum. 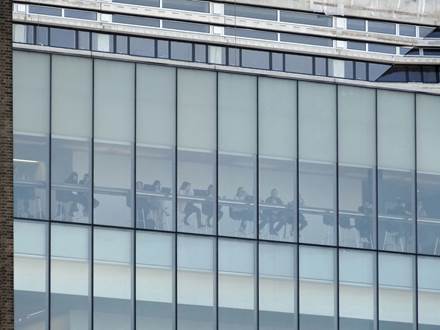 Restaurant with View on the 6th Floor 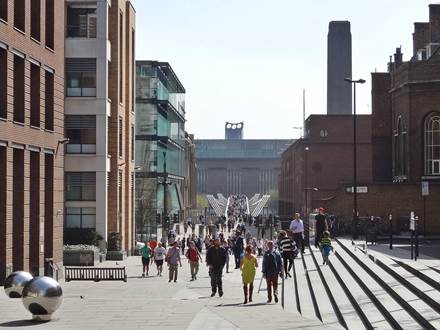 Discover the Highlights at Tate Modern:

1. The area Civil War (Room 3, Level 2 West, Natalie Bell Building) is located in the -Artist and Society- wing. This area is dedicated to the topic of fears during the civil wars in the 20th century. Among the displayed artworks you will find the painting -Martyred Spain- by André Fougeron and -Cosmos and Disaster- by David Alfaro Siqueiros. These works were created during the period of the Spanish Civil War from 1936 to 1939.

2. In the -Explore Media Networks- wing you will encounter the area Modern Times (Room 2, Level 4 East, Natalie Bell Building) where you will learn more about the influence of the fast and constantly changing world on the artists. See how these impressions are reflected in the art works of the early 20th century. Look at the masterpieces like -Windows Open Simultaneously- by Robert Delaunay and -Pierrot with Book- by Juan Gris. The Spanish-born artist Juan Gris lived for a long time in Paris and was an important representative of French Cubism.

3. The area International Surrealism (Room 5, Level 2, Est Natalie Bell Building) is located in the -In the Studio- wing and displays art works from the French and international surrealists. This is where the unconscious and dreamlike impressions are in the foreground. Salvador Dali summed it up as a -descent to the subconscious-. This description is also absolutely perfect for his works of art as well as for the picture exhibited here -Autumnal Cannibalism- about the Spanish Civil War, which broke out shortly before this painting was created.

4. The wing -In the Studio- offers another remarkable area with the description -Studio Practice- (Room 2, Level 2, Est Natalie Bell Building). The place where the art objects are created, the studio, has a huge influence on the artists and thus also on their works. See how this influence of the premises is reflected in the various works. Of course, this is particularly obvious in the paintings which show these spaces as their motif. Like -Seated Woman with Small Dog- by Meraud Guevara and -Interior at Gordon Square- by Duncan Grant. Grant painted this picture in his a house at the Gordon Square in London around the year 1915. A part of the painting shows the studio of Vanessa Bell. Duncan Grant lived there with Vanessa Bell, who was a English painter.

Pierrot with Book by Juan Gris 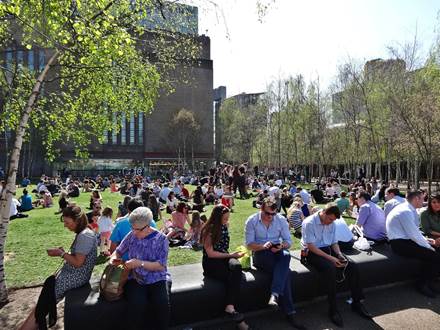 Bank of the Thames at Tate Modern