Tip: The only underground station close to King's Road is located right at the beginning of the road, on the Sloan square. You should be careful if you plan to explore most parts of the shopping street, as it can turn into a long walk with over 4 km. By a bus ride back to the underground station you can halve the distance. The bus lines 11 and 22 run along the complete King's Road and bring you back to Sloan Square. 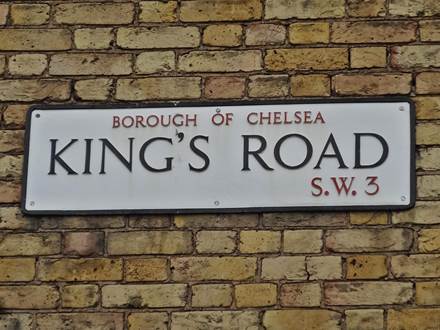 As soon as you leave the underground station Sloan Square and walk towards King's Road you will pass a large Hugo Boss store. Stylish shops with designer clothes and well-known brands dominate large areas of the shopping street. The King's Road has a total length of approx. 3 km. Most of the interesting shops are located on the first km, up to the old town hall of Chelsea at the crossing with Sydney Street. Afterwards the shops are getting less and less and behind the crossing with the Limerston Street you can hardly call it a shopping street.
The -Duke of York Square- is located about 200 m away from the Sloan square, just beside the Kings Road. A food market takes place there every Saturday from 10:00 till 16:00 o'clock. Stroll by the different stands with local products and satisfy your hunger with one of the many freshly prepared and delicious smelling dishes. 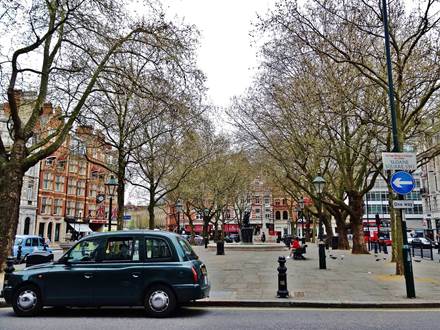 Sloane Square at the Beginning of the Shopping Street 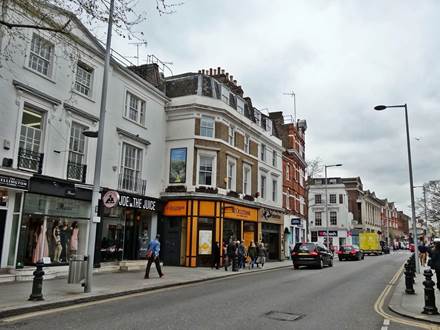 Shops on the King's Road

Shops on the Kings Road:

At the beginning of the shopping street you will encounter the only large department store in the King's Road. The Peter Jones building is right at the corner of Sloan Square. You can stroll through the various departments on 8 levels in a pleasant atmosphere. On the top floor you will find a restaurant with view inclusive.
Only a few steps further you reach the -Duke of York Square-. On this square you will find some stores and restaurants, as well as a former chapel, which is now a shop premise.
A Reiss shop is only about one block further away on the same side of the street. This is a London fashion label in the high-priced segment. Kate Middleton, the wife of the British Prince William, is among the prominent customers of their fashion with simple and elegant style. She also has another connection to the King's Road.
About 500 m farther on, at No. 145, there is a Jigsaw store. This London fashion chain is not only known for luxury clothing, but also for a prominent former employee. Kate Middleton has worked in the purchasing department at Jigsaw.

Already in the 50s the first shops for modern youth fashion opened in the King's Road. At that time, the miniskirts were the latest trend. From then on, the shopping street developed as a meeting place for youth culture and fashion. In the 60s the shops along the King's Road were frequented by famous music legends like Jimi Hendrix and the Beatles. The King's Road 430 was in the 70s an important address for the punk movement. Vivienne Westwood and Malcolm McLaren opened a shop at this address. In the year 1974 the shop was named -SEX- and they offered provocative fashion. Malcolm McLaren was also the Manager of the -Sex Pistols- band who were on the top of the music charts in the year 1976 with the song -God Save the Queen-. The media created at the time the term -Punk Rock-.
The small store on the no. 430 is called today Worlds End and belongs still to the world-famous fashion designer Vivienne Westwood. Trademark is a large clock in the front which runs backwards. Probably one of the last signs of the -No Future- movement in the King's Road. 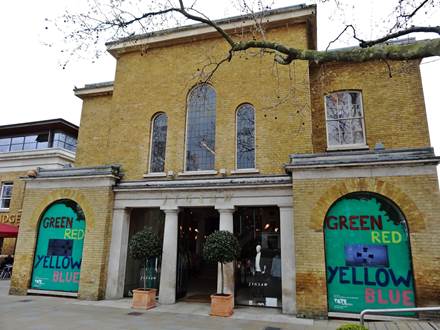 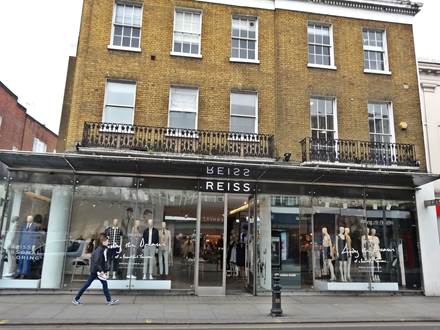